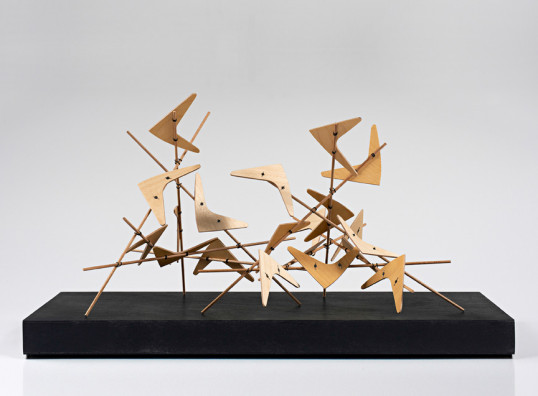 There are towering sculptures made of chairs in one spot, seat shells turning round and round like a carousel in another. On one side, chair fragments soar like a flock of birds taking flight, on the other seating ensembles from the past beam themselves into the present-day setting of the trade fair: at the Featured Editions exhibition at the imm cologne 2014, not a single furniture component is left standing in its conventional place.

Featured Editions is one of the highlights of the new Pure Editions trade show format (Hall 3.2) that was launched in 2013. With this expansion of its Pure design segment, the imm cologne has established a gallery-like platform for visionary interior and furniture concepts by eminent design providers. To complement their product and brand presentation, which is designed as an open stage, Pure Editions exhibitors are invited to submit a presentation concept for the special Featured Editions show. One condition applies: the concept has to be created in collaboration with a designer, architect, artist or graphic designer.

After the successful premiere at the imm cologne 2013, expectations of the submissions for Featured Editions 2014 were high. And indeed, the expert jury was able to choose from a large number of interesting designs. This year’s jury line-up included Robert Volhard and Daniel von Bernstorff from Stylepark, who were joined by Dick Spierenburg (Koelnmesse), Volker Streckel (Design Post Köln) and design consultant Frank A. Reinhardt (FAR_consulting). The best concepts will be implemented in the form of installations mounted on platforms spread throughout the Pure Editions hall. 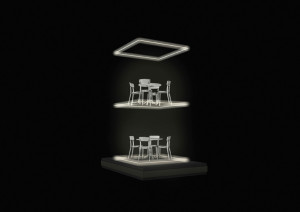 This year too, chairs and armchairs were a particularly popular furniture category for the designers’ and artists’ experiments with form. Basel-based artist Christoph Göttel, for instance, designed “Pimped otto” for pulpo, a delicately balanced tower of jazzed up cardboard armchairs. Designed by Prof. Peter Raacke in 1967 as part of the “Seats for the Unpropertied” series, the folding otto armchair has been re-edited by pulpo and translated into the contemporary zeitgeist by street artists.

“Pelle Air” is another example of the rich diversity of ideas that can be found at Featured Editions. In this case, designers Catharina Lorenz and Steffen Kaz took their inspiration for their installation – a swing carousel that verges on the poetic – from the most striking feature of Pelle, a chair produced by Zeitraum: a freely suspended saddle leather seat shell hung from the solid wood frame. Whilst the shape of the carousel alludes to the milling head used to produce Pelle, its rotating motion illustrates the theme of “spirited sitting”.

For VS Vereinigte Spezialmöbelfabriken, sculptor Prof. Rolf Lieberknecht took the Boomerang Chair from the company’s Neutra Collection to pieces and turned its individual parts into a very special kind of construction kit: two spatial structures – shaped like a tetrahedron and constructed out of the extended rods of the front legs – provide the framework for the side wings of the chair, which take to the air like a flock of birds taking flight. The installation is entitled “Boomerang Tango” in allusion to the two complementary structures.

Swiss company möbelfabrik horgenglarus even goes one step further and risks disrupting the space-time continuum so as to illustrate the concept of tradition and evolution. In the installation designed by Studio Hannes Wettstein, an arrangement consisting of a table with a cast-iron base and four chairs from the 1920s hovers above an almost identical and likewise floating set of furniture from the current horgenglarus collection – surrounded by a square “Time Tunnel” made of glowing neon tubes.

Featured Editions shows furniture such as this from an unusual perspective: totally independently of the market and its intended purpose. Suddenly, in the midst of one of the most bustling furnishing shows in the world, the focus is no longer on technical, stylistic, ergonomic or even price-based arguments but on aspects relating exclusively to the furniture’s form or cultural history. The themes include materials, sustainability concepts, design history or the creative process itself. The motifs can range from (as yet) unimplemented prototypes, product and furnishing experiments, making-ofs, depictions of artisanal processes or the presentation of special editions. 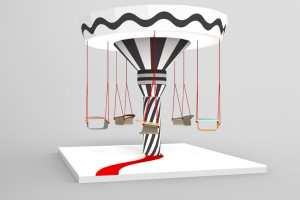 Visitors to the imm cologne – regardless of whether they are professionals or consumers – will thus benefit from a complementary and absorbing experience that enables them to perceive the respective brand in an unaccustomed dimension free of commercial associations. As for the exhibitors, “Featured Editions” gives them the opportunity to enhance their profile with exciting content and innovations.

When it came to the question of implementing “Featured Editions”, it was important to Koelnmesse to involve a channel that is totally independent of Pure Editions. With its comprehensive design competence, Stylepark guarantees the quality of the project and will also be actively communicating the “Featured Editions” via its website and newsletter.