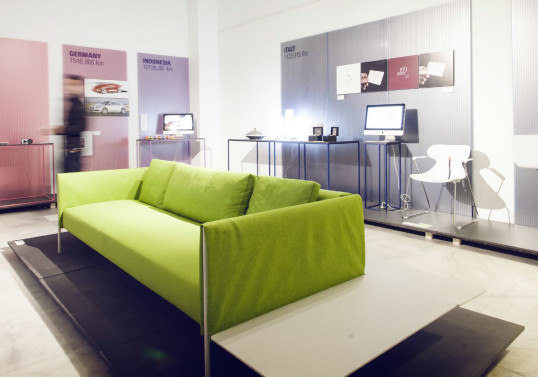 The Designers Association of Valencia (ADCV) announces the fifth edition of the ‘Valencia Design Week’, which will be held in the framework of the ‘See You in Valencia’ initiative and the Cevisama, Habitat and Fimma – Maderalia exhibitions.

The ‘Valencia Design Week’ will integrate various samples on the international projection of Valencian design or graphic design in household products, as well as a ‘circuit design’ by the city of Valencia.

The Designers Association of Valencia (ADCV) has announced the fifth edition of the ‘Valencia Design Week (VDW)’, a proposal which will be held from the 11th to the 14th of next February as part of ‘See You in Valencia 2014 ‘, the initiative that brings together the joint celebration at Feria Valencia of Cevisama, Habitat and Fimma Maderalia exhibitions, as well as a complete schedule of events both at the fair ground itself and in Valencia.

Therefore, the ‘Valencia Design Week’ will be one of the main contents of ‘See You in Valencia 2014’. About this event the Designers Association will pivot different samples, exhibitions and showrooms by which the various related design sector will be invited to join forces, get the design to the street and give visibility and a daily role that it really has.

In this sense, Valencia is a key city to organize a ‘Design Week’ for its tradition and expertise in the design world for its involvement in the business sense and for its industrial potential. Without forgetting that the discipline of design is an important business strategy that helps companies to be competitive in the international market.

‘From Valencia with design’ Sample

One of the highlights that will be part of the 2014 edition of the ‘Valencia Design Week’ is the ‘From Valencia with Design’ exhibition, an ambitious proposal that brings together on the same stage a hundred design projects 100% Valencian, some of which are internationally awarded.

The exhibition will run from the 11th of February at the Museu Sant Pius V of Valencia, one of the most emblematic areas of the city. There, along with works by masters such as Velázquez, Sorolla, El Greco and Tiziano, projects by designers such as Victor Carrasco, Ramón Esteve, Pepe Gimeno, Lavernia & Cienfuegos, Inma Bermúdez, Ximo Roca and Hector Serrano will be exhibited, among many others.

All of these designers and Valencian design studies, belong to the ADCV and have developed a hundred projects and designs for foreign companies, thus vindicating the internationalization of Valencian design and quality as a major exporter of services to large international companies. Many of these projects have won prestigious international awards such as ‘Best of Year’, ‘Red Dot Design Award’, ‘Interior Innovation Award’ and ‘Compasso d’Oro’.

The exhibition, organized by the ADCV and Las Naves Space for Contemporary Creation, is curated by Carlos Tíscar and designed by the Yonoh study and consists of projects across many industries such as automotive, cosmetics, furniture, lighting, toys and ‘packaging’. It also has the support of partner companies Actiu and Finsa.

The Valencian Museum of Illustration (Muvim) will be another of the scenarios in this edition of ‘Valencia Design Week’. There will be held during the week from the 11th to the 14th of February, the exhibition ‘Eating, Drinking, Shopping, Spending’, which aims to demonstrate the quality of Valencian design in one of the areas of everyday life: shopping. This exhibition will bring together different examples of graphics applied to the everyday household product. Products that are perishable daily consumption such as for example, food, beverages, perfumery, toiletries and cleaning products.

Together with these two exhibitions, ‘Valencia Design Week’ has also organized a “Circuit Design” through which a series of presentations, showrooms and ‘pop up’ events is scheduled on a city tour with design as the main character.

The goal, ultimately, is that Valencia will become during this week one of the most important international capitals in design, following the philosophy that permeates the proposal for ‘See You in Valencia’, both through a powerful commercial offering at Feria Valencia as well as a complete schedule of events in Valencia.

All information on the ‘Valencia Design Week’ is available on www.adcv.com and www.nosvemosenvalencia.com.