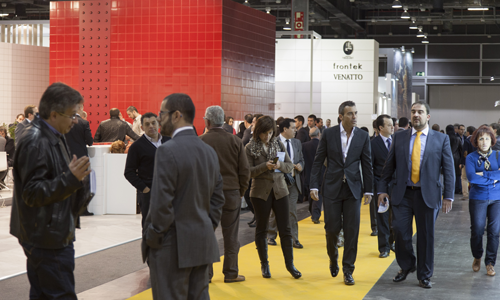 Cevisama, the International Exhibition of Ceramics for Architecture, Bathroom and Kitchen Fittings, Natural Stone, Raw Materials, Frits, Glazes, Colorants and Machinery, will be opening its doors again from 11 to 14 February 2014 at Feria Valencia. All the signs point to a successful show. 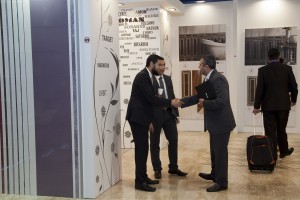 In fact, exhibitor bookings have already filled 70% of the space occupied by the last show. What’s more, the confirmed participants include leading firms from the ceramic industry and related sectors, trend setters in Spain and abroad, who see Cevisama this year, as ever, as a vital business platform.

Most of the reservations made during the renewal period (which has just closed) have come from ceramic tile companies, followed by frit, glaze and colorant firms and ceramic machinery firms. Ceramic machinery joins the Cevisama mix on even years. 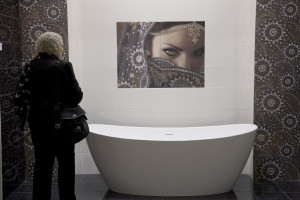 “We’re still quite some way from our final target, but we’re feeling very good about it, because the marketing phase has just barely got under way”, states Carmen Álvarez, the director of Cevisama.

The show’s director has explained that the Cevisama team is spending July hard at work spreading the word about the show in Italy. “One of our top priorities for 2014 is to strengthen Cevisama as the major showcase for European ceramic products. A showcase featuring the quality and innovation of cutting-edge companies and worldwide leaders. That’s why we want to bring in Italian products. We know manufacturers from our Mediterranean neighbour could find in Cevisama a great business opportunity and the chance to get a toehold in markets where we’re already consolidating our position, like Russia, the Maghreb and the Middle East”, Carmen Álvarez explains.

More and more quality buyers from such markets are making an appearance at Cevisama. And in 2014 they will again be a priority in the show’s plans to attract international visitors.

Cevisama hopes to grow by bringing in visitors from emerging countries, but it has no intention of ignoring its traditional markets, like the EU countries. “In short, our goal is to make the show even more international by expanding what we have on offer and enticing new, high-quality buyers in to see the wares”, the show’s director declares.

Another drawing point of Cevisama 2014 will surely be the fact that it is scheduled to coincide with Feria Hábitat Valencia, Fimma and Maderalia. Each of these three trade shows is a leader in its sphere, and each shares strong synergies with Cevisama.

Feria Valencia is going to be hosting the international scene’s biggest get-together in architecture, interior design and decoration. It is cultivating the attendance of domestic and international opinion makers who have ties to the market in contracting for the comprehensive outfitting of buildings and other facilities. These headliners are mainly designers, architects and interior designers, members of the professions that currently account for around 20% of Cevisama’s visitors.