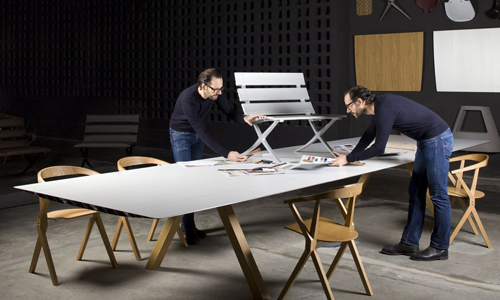 “I’ve known BD since the late eighties or early nineties. I was a student of design then, and at the time Spanish design had a real Renaissance or it just seemed to have popped up on the map. I drew my intention to the country, I travelled to Spain and discovered a lot of things. Among those BD Barcelona Design, a company which had an incredible facility to mix old and new, and something quite artisanal with very industrial things.
Many years later when BD got in touch with me, it seemed so clear to me that I wanted to make some kind of reference to the history of the company that I like so much: a collection with aluminium extrusions. 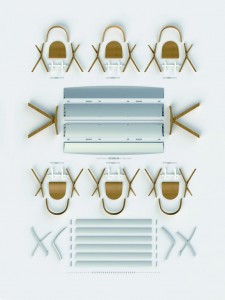 I proposed making just a big table, like an aeroplane wing. When you see the table in the largest dimensions, up to almost 6 meters in length, it is something that the eye with the brain doesn’t understand of how it can work.
It was obvious that if you have a table you need chai rs. So it became the next project, the B Chair. But instead of doing a chair in aluminium, we opted for a chair in wood with one extruded element: the technical spine of the chair. A quite invisible piece of tube. It is a wooden chair that has a classical form with a half round back. The seat is folding, which allows for horizontal stacking so it’s a chair that can be quite economical in terms of the space it takes up.

After the chair we wanted to find a new territory and we conceived Bench B. I started to work on this project during my bursary at the German Academy Villa Massimo in Rome in 2011. My first inspiration came from the wrought iron benches which furnish the parkway of the academy´s premises.
Structural considerations soon led to the cross-shaped leg in cast aluminum which, inevitably, created an image reminiscent of the famous Barcelona chair (1929). The logic and beauty of this leg detail were so definitive, they overruled any initial qualms concerning Mies van der Rohe´s iconic design. Ironically, my project was to be produced by a company based in Barcelona.

Nearly a century later, we were able to re-interpret this furniture classic in a new way, making it ergonomically better while turning it into a more systematic, technologically advanced product. Using aluminum extrusions for the curved seat/back profile and slats is a logical continuation of my previous work for BD, but also adds a great flexibility to the production of the bench.” KG